The demographic changes in Catalonia are indicating that the demographic group of old people is growing and that this group has problems to get into worthy and accessible housing. To tackle this problem the city hall of Barcelona is constructing apartment buildings with services for old people in different neighborhoods of the city.

We are presenting 3 videos that explain the “Gran Open Extra” project, which the festival 48h Open House BCN is organising since 2016 to connect architecture, old people and other citizens. The project is based on architectural formation of the inhabitants of said housing (the architects have explained the main characteristics of the buildings for old people), and on the inclusion and visibilization of this group for the festival public (the inhabitants are volunteering as guides during the festival, explaining their experience and opening the doors of their homes)

At the moment, the number of this type of building that the city offers, is inferior to the demand: What percentage of public housing is necessary to meet basic needs of the society and guarantee the right of housing removed from the private sector? 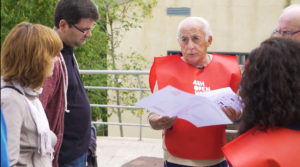 Born in Barcelona in 1965. Degree in Architecture from the Polytechnic University of Catalonia School of Architecture in 1989. Master in Large-Scale Projects in 1993. Executive Development Degree from the University of Navarra IESE Business School in 2010. Member of the Architects’ Association of Catalonia Board of Directors for the Barcelona area from 2006 to 2014. In June 2015, he returned to the Catalan Land Institute as Director of Services, first, and Manager a few months later and held that position through June 2018. He is currently Director of the Catalan Land Institute, a public company that falls under the Catalan Ministry of Territory and Sustainability.

LIVING TOGETHER: A panel on housing

This panel discussion concludes the housing cluster and the three previous events from Barcelona, Buenos Aires and Vienna, bringing together three key figures in housing from these cities.

Globalisation and digitisation have brought a substantial change in the way we live. Also, a new resilient and caring approach towards nature and society has shown recent tendencies in urban planning and housing. A matter of debate will therefore circle around questions on how we are going to live together in the future, as well as exploring new concepts and pilot projects.

JOSEP MARIA MONTANER MARTORELL Josep Maria Montaner (Barcelona, 1954) Architecte and Ph D. in the ETDAB-UPC. Senior University Professor on Theory and History of Architecture at the Barcelona School of Architecture (ETSAB); and from 2015 to 2019 he was Deputy on Housing in Barcelona City Council. Author of more than 45 books on architecture, was visiting lecturer at the Architectural Association School of Architecture in London (1986-1987), scholarship in the Spanish Academy in Rome (1987) and “visiting professor” in The New School of New York (2007). He has taught courses and given lectures in Europe, America and Asia. In 2005 he was awarded by the Spanish Government’s National Prize on Urbanism.

This website uses cookies to improve your experience while you navigate through the website. Out of these cookies, the cookies that are categorized as necessary are stored on your browser as they are essential for the working of basic functionalities of the website. We also use third-party cookies that help us analyze and understand how you use this website. These cookies will be stored in your browser only with your consent. You also have the option to opt-out of these cookies. But opting out of some of these cookies may have an effect on your browsing experience.
Necessary Sempre activat
Necessary cookies are absolutely essential for the website to function properly. This category only includes cookies that ensures basic functionalities and security features of the website. These cookies do not store any personal information.
Non-necessary
Any cookies that may not be particularly necessary for the website to function and is used specifically to collect user personal data via analytics, ads, other embedded contents are termed as non-necessary cookies. It is mandatory to procure user consent prior to running these cookies on your website.
DESA I ACCEPTA